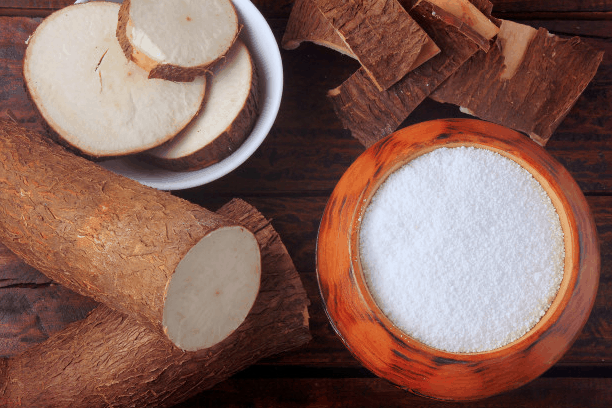 The cassava plant (“Cassava”) is a perennial woody shrub with edible roots Rich in Nutrients with a higher carbohydrate content than rice and corn. Used to make traditional tapioca flour but also the key ingredient for a diverse range of common products including sweeteners, alcohol, confectionery, animal feeds, personal care & cosmetics and many other commercial, pharmaceutical and industrial uses. The best part of this plant is that it can survive for very long in soil that is poor in quality. Cassava is thought to improve health by boosting immunity and regulating digestion. The root of the plant is rich in vitamin C, while the leaves contain beta-carotene, lysine, and other compounds beneficial to the skin and metabolism. Below are the various possible benefits by including Cassava in your diet.

1. CASSAVA SUGAR IS HEALTHIER THAN SUCROSE

• Sucrose is the scientific name for table sugar. It’s a naturally occurring carbohydrate found in many fruits, vegetables, and grains, but it’s also extrated from sugar cane and sugar beets to be used in many processed foods commonly such as candy, ice cream, breakfast cereals, canned foods, soda, and other sweetened beverages.

• Cassava Sugar is a natural liquid sweetener made from tapioca starch extracted from cassava roots. This clear, neutral-flavored syrup adds sweetness to various foods without the higher calories and carbohydrates of Sucrose and associated risks.

• Uncontrolled high levels of Sucrose can result in sugar-related diseases, such as diabetes. Obesity may also occur due to the conversion of excess sugar to fat, stored in adipose tissue and around your joints and organs, that can negatively affect your nervous system and veins, and block or restrict blood vessels block leading to fat high blood pressure.

• Cassava Sugar provides great healthy alternative to sugars, not only is it versatile in its applications, but health benefits are equally unmatched by any other sweetener.

The fiber content of Cassava is insoluble allowing it to absorb all the poisons stored in your intestine and helping reduce any inflammation in your digestive tract, thereby improving and maintaining a healthy digestive system.

Cassava can be very important for those trying to shed those excess pounds that have accumulated over the years. The high fiber content in cassava can make you feel full for a longer period of time. Thus, reducing the need to constantly snack on food and binge eating so as to suppress weight gain.

Cassava flour is high in carbohydrates that helps in boosting energy for the body and your brain will begin to work more efficiently when you consume cassava as part of your diet.

The cassava leaves are high in Folate and vitamin C, improves the body’s immune system. Vitamin C attacks the nucleus of viruses and bacteria, along with maintaining good bone health and eliminating free radicals. Folate supports the production of cells in our body, genetic material for life and preventing DNA mutations.

The Cassava leaves contain an important vitamin that can help prevent life-threatening diseases such as cancer. B17 helps in stimulate the content of red blood cells, the loss of which often leads to cancer.

The consumption of cassava flour can lead to significantly lowering blood pressure thanks to the high dietary fiber content in Cassava, approximately 4 grams per cup of flour.

Cassava flour has a high content of protein equivalent to 2 grams per serving sufficient to meet your daily dietary requirements. It will help build and maintain your muscle health and nourishes the supporting tissues.

The antioxidants found in Cassava can help curb diarrhea. A simple solution of roots and boiled water (for an hour) can help remove the bacteria that caused stomach problems and reduce the symptoms of diarrhea.

Rheumatic diseases include those diseases pertaining to the muscles and joints such as osteoporosis, arthritis, spondylitis and lupus. A diet high in magnesium can lead to lower blood pressure and reduces the chance of rheumatic diseases in the future. A third of your daily magnesium requirement can come from Cassava helping to reduce rheumatism onset.

Cassava contains high levels of Vitamin A and compounds such as bakarotennya that improve the health of your eyes and in the future prevents blindness or poor eyesight.